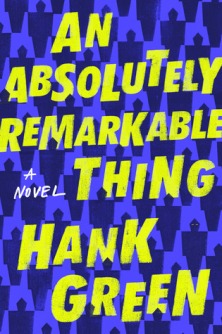 The Carls just appeared. Coming home from work at three a.m., twenty-three-year-old April May stumbles across a giant sculpture. Delighted by its appearance and craftsmanship–like a ten-foot-tall Transformer wearing a suit of samurai armor–April and her friend Andy make a video with it, which Andy uploads to YouTube. The next day April wakes up to a viral video and a new life. News quickly spreads that there are Carls in dozens of cities around the world–everywhere from Beijing to Buenos Aires–and April, as their first documentarian, finds herself at the center of an intense international media spotlight.

Now April has to deal with the pressure on her relationships, her identity, and her safety that this new position brings, all while being on the front lines of the quest to find out not just what the Carls are, but what they want from us.

After reading the synopsis of An Absolutely Remarkable Thing, I thought it sounded cool. I liked that the story follows a character between 19–25 and also liked that the story used YouTube as a narrative device, which I thought Green could have used to his advantage. Hank Green is a YouTuber and even co-founded VidCon, a very successful YouTuber convention. I am also a fan of John Green’s novels and was intrigued about reading a book written by his brother.

The plot of this book, while unique, is a little confusing. I think this is due to the way the story is written. Green’s writing is rudimentary. The events are constantly told to the reader, insisting that this sculpture randomly placed in New York is a remarkable thing – but why is it remarkable? There needed to be more intrigue and subtlety rather than outright insistence that this sculpture was incredible. This is how the sculpture, a “Carl”, is initially introduced:

“I turn to head back to the office and immediately I see it. As I approach, it becomes clear that it is a really…REALLY exceptional sculpture. I mean, it’s AWESOME, but it’s also a little bit “New York awesome,” you know?”

Although Carl was eventually described, this type of writing firstly took me away from the moment. I was somehow made to believe that a metal object was this amazing thing when I didn’t even know what it looked like.

The scenes were also not structured very well. For example, the novel opened straight away with an insight into April’s life rather than a scene that grabbed me. This was a constant throughout the novel.

As for the plot, it moved at a fast pace that seemed unbelievable. I didn’t find it very natural for April to be getting fame and lots of money just a few chapters in.

The character of April was interesting on the surface. However, her characterisation was one-dimensional. Her voice sounded like that of a teenager, not a twenty-three-year-old. Lines like, ‘And then my MetroCard got rejected for NO REASON’ added to the child-like narrator of April. I understand that April was supposed to have a cool, sarcastic kind of personality, but it just made her appear snarky.

What truly made this book difficult to tolerate was the writing style. That mixed with the awkward plot and unlikeable narrator of April made this book a one-star read. Sorry Hank Green…An Absolutely Remarkable Thing was unremarkable.

Thank you to Hachette Australia for the advanced reader copy that I received in exchange for an honest review.

Have you read An Absolutely Remarkable Thing? If not, do you want to?

7 thoughts on “An Absolutely Remarkable Thing by Hank Green (Review)”