Somehow, it’s already the end of October! I hope that everyone had a good Halloween (if you care about it). I bought some chocolate for trick or treaters, except no one ever comes to my house, which I should have known but I still hoped. When I was a kid, in my old house that is only about five minutes away from where I live now, we would have quite a few, so maybe it’s just my street.

I’ve combined my October wrap-up with September because I never actually posted one. I’ve been awful at posting lately and there are several reasons why, the main one being that I am writing a thesis. A dumb reason I put off posting is because to make my blog’s graphic I have to use my mother’s computer and it’s so slow. I’ve also kind of lost my spark for blogging, which is sad, but maybe it will come back now that it’s my uni break! My break is 4 months (but I still have to write a 15000 word thesis).

In September I read four books and in October I read three books. They were all pretty enjoyable, but my favourite was Nine Perfect Strangers by Liane Moriarty. It was an unexpectedly great read.

What If It’s Us by Becky Albertalli and Adam Silvera

This book has a great premise: a love story between two boys set in New York – what could go wrong?! But the lack of plot was where this book struggled to hold my interest.

The Virgin Suicides by Jeffrey Eugenides

I loved the writing in this story and the narrative was quite unique, except it was a little dull at times.

This book had great writing and even an interesting, morally encoded premise, but it was so boring! I had to read it for a creative writing intensive uni subject, yet we didn’t even talk about it once! Kind of a waste of my time.

The story of the character in this book is so important, and is the voice of many teenagers around the world who grow up in the foster system. It’s a great read and I think the author put some of her own experience into the novel, which makes it really realistic.

All Your Perfects by Colleen Hoover

I really like Colleen Hoover’s books, but this was my least favourite. I liked the story, as it’s one that needs to be told, but it didn’t impact me in the way it should have.

Nine Perfect Strangers was so fun! It was funny yet twisted at the same time. Mainly, I loved the characters and their eventual connection with one another.

The Autobiography of My Mother by Jamaica Kincaid

This book has an important story, but I ultimately just found it to be a bit dull and I was not a fan of the writing style (there was no dialogue whatsoever).

I am currently reading American Psycho by Brett Easton Ellis. I had hoped I would finish it before Halloween, because it was my ‘spooky’ read, but I wasn’t able to.

I have a few books I would like to read in November:

I watched two movies that I really liked in September and October:

A Simple Favor follows two friends and focuses on how one reacts when the other goes missing. This movie is just so much fun! It’s basically a thriller and a comedy in one, and the mix is so fantastically well done. There are so many surprises and funny moments, and it’s one of those plots where you don’t know who the ‘bad guy’ is, which enhances the shocking moments.

Eighth Grade is about a quiet, unpopular girl in the last week of eighth grade. It is somewhat of a painful movie to watch because of the awkwardness of living life at that age, and the feeling is especially prominent as an adult. Just ten minutes into the movie I was like, ‘Wait a minute, is this me?’. The girl is so similar to how I was at her age, and I really felt all her emotions, especially when she was talking with her father about being a disappointment. But (if you watch as an adult) you get the satisfaction that eighth grade is over, and you think, ‘Does anything at all that happened to me in eighth grade even matter?’. And the answer is no, because it’s quite an insignificant year. Anyway…great movie!

A few days ago I got a puppy!! Her name is Nelly and she is a ten week old beagle. She’s so tiny and cute, I can’t even handle it. 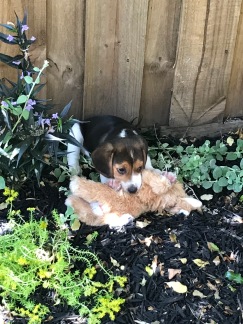 How many books did you read in October?