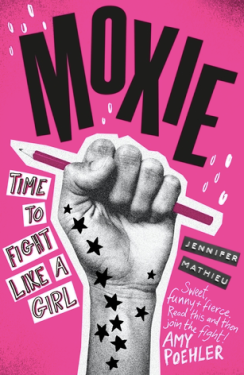 Viv’s mum was a tough-as-nails, punk rock Riot Grrrl in the ’90s, and now Viv takes a page from her mother’s past and creates Moxie, a feminist zine that she distributes anonymously to her classmates. She’s just blowing off steam, but other girls respond and spread the Moxie message. As Viv forges friendships with other young women across the divides of cliques and popularity rankings, she realises that what she has started is nothing short of a girl revolution.

Moxie follows Vivian, a girl in High School who is fed up by the sexist remarks the boys make about the female students. Vivian decides to create Moxie, which is a magazine (or zine, as she likes to call them) aimed at improving the mindsets of some of the boys. She makes friendships with the like-minded peers around her, and Moxie grows and grows as the year progresses.

I really enjoyed Moxie! Before reading the novel, I had never heard of the term “moxie” before. I actually thought it was the name of the protagonist. It is sort of explained in the novel, but it is a word that connotes to a bold, determined person.

“It occurs to me that this is what it means to be a feminist. Not a humanist or an equalist or whatever. But a feminist. It’s not a bad word. After today it might be my favorite word. Because really all it is is girls supporting each other and wanting to be treated like human beings in a world that’s always finding ways to tell them they’re not.”

Moxie is almost entirely about feminism. There are events that happen which influence Vivian in gaining an opinion regarding the misogyny at her school. It is mostly focused on her school, which is in a small town in Texas. I went to an all-girls Catholic school, so I haven’t experienced what she has before and was very surprised by some of the injustices.

Vivian is a very admirable character and I love how her courage grew as the novel moved forward. I grew very attached to her and her actions, and really rooted for her through-out the story. The way that the author was able to make you feel connected and involved with the novel was great.

Moxie had so many good things about it. I thought the beginning was enthralling because I was very invested in what Vivian was doing. This really made me want to continue reading. After a while, there is a love interest introduced in the story: Seth. I thought that Seth was a great guy, and even though their story dragged a bit at times, I enjoyed where their relationship went.

In my eyes, Seth wasn’t really supposed to be a very big focus. It was predominantly about changing things at the school, but Vivian was the protagonist and had interests outside of her Moxie zine. I liked that he tried to understand what Vivian was going through. There were times that made me annoyed with his actions, though in some way, I think that was supposed to be the point.

Another sub-plot weaved into the story was that with Vivian’s mother. She used to be a big punk and feminist of her own when she was younger, but now she is just working and raising a child. The storyline with her and her new boyfriend was really awkward for me when I was reading it, as it was so uncomfortable (also relatable for me).

I loved reading the ending of the novel. It almost made me cry and I thought that the plot worked really well to provide a satisfying conclusion for the readers.

There is not really anything I disliked about Moxie! One tiny thing is that it lulled when the romance was introduced. I also felt that the scenes with Seth were a little boring. I found that I was much more interested in the main plot with Vivian and her zines. Aside from these things, it was a great read.

I have rated Moxie 4.5 stars for its captivating and bold storyline. I would definitely recommend Moxie to all readers! Perhaps young female teenagers would appreciate it the most, but I still think it could be enjoyed by every gender.

See Moxie by Jennifer Mathieu on Goodreads and purchase through Book Depository*.

*This is an affiliate link, which means I get a small commission if you purchase something using the link provided.